Robert Moss - Time Travel & Reality Creation in the Multiverse $74.00
Back to products
Next product

Zero-G PHAEDRA Redux is a digital online course with format files such as: Video (.MP4 .TS .AVI ..) Audio (.MP3 .WAV ..) Document (.pdf .doc .csv ..) etc. Not physical DVD. You can access this course wherever with “smart device” or you can save one copy on your personal computer/laptop/mobile. 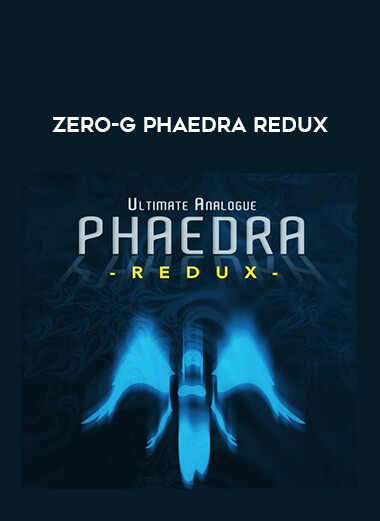 PHAEDRA Redux has been produced by Sam Spacey who also produced the highly-acclaimed Epica and Epica Bass virtual synths.

Featuring over 4GB of sounds, 20,000 samples and 720 patches – PHAEDRA is the ultimate virtual analogue synth.

Unhappy with the lack of raw sonic power in virtual emulations of VSTi analogue synths producer Sam Spacey set out on a three-year journey to make the ultimate synth and ended up creating a monster in PHAEDRA.

Constructed with the same attention to detail as a huge orchestral sample library each of the 20,000 samples has been edited and looped by hand, with loops being very long so as to extract that lovely analogue randomness magic. Nearly every single preset has each separate note sampled to eliminate aliasing within the instrument’s range.

With Kontakt’s engine being pushed totally to the limits we have produced a library that is a full synthesizer in its own right. This library is based on no particular electronic genre and would lend itself well to any style.

$19.00
Compare
Add to wishlist
Start typing to see products you are looking for.